Proof Of End Of Sellers’ Market On Lake Martin 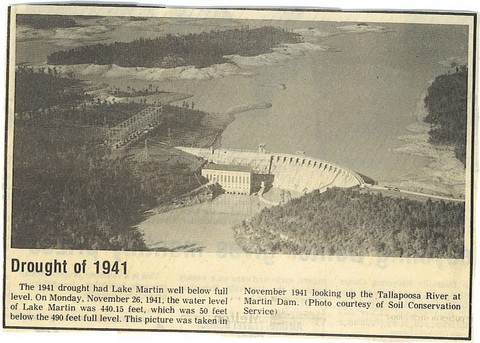 Lake Martin has been a victim of the 2007 drought that has affected Alabama and much of the southeast.  The lake level is down to 480 already, which is the normal winter level.

Apparently in 1941 it was worse.  50 feet down is about as bad as it gets.  I think back then they used to bring the level down in the winter by 30 feet anyway, so maybe the 1941 drought’s true effect was 20 or so feet.  Since this picture was taken in November, I am sure there is some effect of the winter level.

Still, 50 feet down is pretty bad.  I was shocked to see this in an email that was circulating around.  Maybe someone will debunk this as an urban legend, but at the very least we can be glad that we don’t have to make up 50 feet this spring.

Thanks to Eric of Lakedog Appraisals for sending me the photo!