Closets For Your Lake Martin Cabin: $50

Lake Martin Magazine interviewed me a couple of weeks ago about the effect of the drought on the Lake Martin real estate market, and general trends affecting buyers, sellers, and realtors. They included it in an article called “Special Report: The Water Issue” in the November 2007 issue. I thought Nikki Reeves and Kenneth Boone did a good job of covering a huge topic.

Lake Magazine: Has the lake level affected your individual/company’s business this year in comparison to previous years? Has it done so in a positive/negative way?

John Coley: While I personally have been fortunate to have a better year in 2007 than 2006, I can’t say that for the real estate market as a whole. Through August, the number of waterfront closings per year was down 35%, from 346 to 226. I can’t help but think that a portion of that is due to the low lake level. I don’t think that it’s a majority of the culprit, though. I think the major blame for a slower market still lies at the feet of sellers who have overpriced their offerings. From 2000 to 2006 sellers became accustomed to 30% gains in value per year, and priced in 07 accordingly. The facts have shown that there was little or no value gain in 07 from 06, and some sellers have not figured that out yet. Case in point is the auction in July 07 at Harbor Pointe. They sold 25 condos in one day even though the water was extremely low, so you can’t blame it on the level. They sold them because the prices were low enough for buyers to accept.

LM:  Do you think the drought will be a positive thing for the lake market – in terms of rebalancing a surplus of property and real estate agents?

JC:  This is kind of a philosophical question. I think it is part of the natural free market cycle of business, so I don’t think it’s “positive” or “negative.” It’s just natural, so deal with it. Is a forest fire a “positive” experience for wild turkeys? Well, if you’re the turkey that gets burned up, no. But if you survive it and the forest in general grows more healthy because of the fire, then maybe it’s “positive” for you.

On the practical side, I do think that the lake will follow the national trend of less people joining the real estate profession over the next two years or so. The same thing happened in the tech stock boom of the late 1990s. Lots of people quit their jobs to be “day traders” or they did it on the side. The stock market crashed, and they went back to their old jobs.

There will always be room in the market for good, honest, hardworking real estate agents. In a slower market, there is less incentive for those who are half hearted or not dedicated to join up. The same rule applies in any profession. In the minds of the average American, real estate agents have a pretty low image, so I doubt we’ll see any “Farm Aid” style benefit concerts for starving Realtors.

LM: What benefits are there for buyers in the coming months? Sellers?

JC:  Buyers – I think it’s a buyers’ market in every category (condos, lots, homes), so they have the benefit of buying at good prices. The only way they can benefit, though, is to actually buy. If they sit around and try to perfectly time the “bottom” – then they may miss out. Study after study shows that most “experts,” much less the average joe cannot accurately predict the perfect bottom of any market. In fact, once the public realizes that a market is on an upswing, sellers have started to gain momentum again.

Sellers – I have talked to several people that are now considering upgrading their homes to take advantage of the buyers’ market. I think another benefit is that if they price their property correctly, and either the water comes up next spring or interest rates tick down a half point, they could have some pressure relieved. The last buyers’ market in 1999 and 2000 lasted for a couple of years, if that, then it took off and ran for 7. Sellers can be confident that, if they price it right, stage it properly, and market it hard, their home will still sell. It might take longer, but a good agent can get it done. 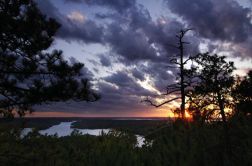 LM:   Is there a silver lining to the drought for the area’s real estate market?

JC:  If Alabama Power is successful in their efforts to raise the winter level water pool to 483 or 485 as opposed to 480, that would be great. If this drought gives them the evidence they need to make the case, it will be worth it.

And if there are fewer real estate agents around, maybe there will be fewer agents’ mugshots grinning at you from signs, magazines, and mail outs. Ha!!

JC:  If this severe drought continues, I think it will become a major, rather than minor negative effect on waterfront sales. The question in the minds of the buyer that’s new to the market, is “will it ever come back?” Veteran buyers realize we’re in an 80 year anomaly and it hasn’t bothered them that much. But 2 or 3 years straight of less than full pool conditions will start to take a heavy toll. Personally I think that is highly unlikely if you look at the rain patterns over the last 50 years. But it’s a remote possibility.

I think that most sellers will not be very negotiable in Jan 08 – Mar 08, gambling that the water will come up. They will figure, “hey, I’ve waited this long, why not wait a little longer.” I think more buyers will start to wake up and realize that the time to buy is now. For so long I heard from buyers that said “call me when that market is not so crazy.” I’m calling them now.

LM:  Anything else you think needs to be included.

JC:  Feel free to quote from these related posts:

Thanks again for the mention, Lake Mag!!  (all photos in this post were taken by Kenneth Boone / Lake Magazine – Lake Martin Issue, November, 2007)