It will soon be Jazz Fest Time at Lake Martin! 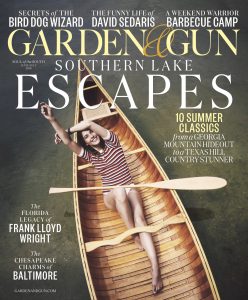 Our very own Lake Martin received national recognition in the June/July issue of  Garden & Gun Magazine!

A feature on Southern Lake Escapes described the oasis we know to be Lake Martin. In fact, the canoe featured on the front of the issue is made by our very own Ambrose Canoe Company  out of Alexander City.

Some of our favorite spots, such as Catherine’s Market, Kowaliga, and Chimney Rock were mentioned in the article.

We know that our lake is a gem, and Garden & Gun realizes it too! Click here to read the article on the Garden & Gun website.