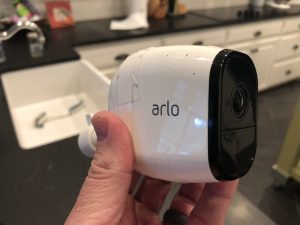 Have you thought about getting security cameras for your home or condo at Lake Martin? Then you might be interested in my below review of the Arlo Pro cameras.

First of all, I knew that I wanted an internet based wireless camera. That might not fit with your needs, but I knew that I had no interest in running a bunch of wires around my home. That was my first attraction to the Arlo system – it runs totally off of Wifi. You just sync up each camera, then mount it to wherever you want some overseeing. Voila.

You will need co-ax or hard wired internet at your home. My internet service is with Charter / Spectrum so I was in business. I already have a Wifi network setup, so that part of the setup was done.

I bought my system at Costco (another bonus for us because of the ca$h back). It came with the base and 3 cameras. You plug the base up to your existing Wifi router. According to my more techy friends, the Arlo base creates an additional private Wifi network over which the cameras communicate. You don’t really have to know how it all works, because all you do is download the Arlo app on your phone. Once you do that, the app walks you through setting up the base and the cameras.

Of all the tech things I have ever installed in my life, Arlo is about the only one that was as easy as they said it was supposed to be. While it’s true that you must have internet with Wifi, I think it’s a great choice because of the pure ease of setup and maintenance. It is easily monitored, and easily accessed via the app on your phone. If something triggers the motion detection, Arlo sends you notifications to your phone. You can also check what is going on live just by opening up the app. This has proved useful when we have been gone but have wondered if someone dropped off something at our house, or wondered if our son’s car was still there. The cameras even have a 2 way communication system, so you are able to hear audio and speak back to anyone within earshot. We did this once with some teenage visitors and it freaked them out a bit! We all had a good laugh.

My batteries also lasted about 3 or 4 months before I had to recharge – but that will depend on your usage and settings. It came with an extra battery so really I just charged it, swapped, and repeated. It took about 30 minutes to do this for all of the cameras so I was pleased with that. I also really like that you don’t have to pay any upkeep fees or any monthly amounts. You pay for the kit, and that is it. If you want to add cameras or buy different attachments, it is easy.

I highly recommend them to anyone that may be considering cameras at Lake Martin. My wife tells me that I am a 6 on the Enneagram and therefore prone to worst case scenario thinking. But you don’t need a doomsday situation to want a camera. For instance, some lake home owners I know have cameras pointed at their dock, so they can make sure that their boats are OK. As reasonably priced as Wifi cameras are these days, I think it makes total sense.

We have good crime rates here at Lake Martin, so you will likely never need them. But… just in case… investigators at the sheriff’s department have told me that cameras catch criminals. Those loud alarms are great, but a picture of the perp is worth way more than a thousand words.