Why I Give Away The Milk For Free

Russell Lands has developed neighborhoods on Lake Martin for over thirty years, but its newest, The Ridge, is vastly different from any one it has done before.

If you would like to see waterfront homes and lots for sale right now in The Ridge area, CLICK HERE to go to my Ridge Neighborhood page. I have a report that shows every waterfront home and lot for sale – by all agents, all brokerages, on Lake Martin. It pulls from the Lake Martin MLS so it will be current no matter when you visit the page.

Russell Lands has gated communities like Willow Point, and the Ridge is near to its other developments of Windermere, Windermere West, and Windover.  But The Ridge is a totally new animal.  Here are 5 Things That Make The Ridge Different:

1.  Heavy emphasis on selling through approved builders – Russell Lands started this Lake Martin trend a few years ago with Phase I of The Ridge, and continues it with Phase III.  They sell a certain number of lots to “approved” builders, who build spec houses and then turn around and sell them for the builders.  In prior developments, they sold almost 100% to the end homeowner.  The use of approved builders gives them much greater control over the quality of the homes.  They also get a lot of design consistency on the look of the homes by also having “approved” architects.  I think this also drives up the price so that their initial offering lot price to homeowners is pretty high.  As far as I can figure there is no real “pre-construction” pricing. 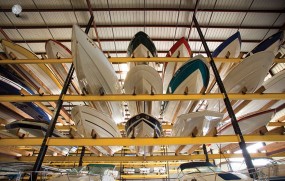 on the lake.  The marina is close to Chimney Rock by water.  They sell gas, they have a huge line of boats that they sell, and also sell boating and skiing accessories.  Another big part of their business is boat storage.  You can rent a wet slip (a parking spot at a dock), but they are more expensive and rare than dry storage.  Dry storage is where they stack your boat on a huge rack inside their warehouse.  When you are ready to go, they come pick it off the rack with a forklift and put it in the water.  No matter how many times I see that it still makes me nervous.  They are adding on to the dry storage.  A company official was quoted as saying the The Ridge Marina will have the “biggest dry storage east of the Mississippi.”  That’s big, friends.

3. The Ridge Club – Russell Lands is currently building a 9,000 square foot clubhouse called The Ridge Club.  While Willow Point has its Golf and Country Club, Willow Point residents are not necessarily members of the club, and vice versa.  In the Ridge, however, part of the homeowner association dues pays for membership to The Ridge Club.  Planned amenities include swimming pools, tennis courts, athletic fields, children’s play center, workout / cardio center, and a bar and grill.  From what I hear they have commercial lots set aside for possible restaurants, etc.  See the construction progress photos on the left.  It looks like it will be as nice as promised.

4.  Off water activities- Usually, in Lake Martin new construction developments, merely token emphasis is placed on off-water lots and properties.  At The Ridge, Russell Lands attempts to offer something to do off of the water, and (I assume) by association, raise 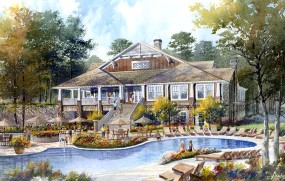 the value of off-water residential lots.  They have designed sidewalks all through the Ridge, which is very different for the lake.  They also have cut in extensive walking trails through the woods around The Ridge.  I hear that the ultimate plan is to be able to walk, run, or bike on trails from The Ridge to Willow Point.  Look at a Lake Martin map to appreciate how huge of an area that is.  They also have plans for a town center located on highway 63, close to Windermere Road, that will have kitschy shops, a high end grocery store, and a gourmet restaurant.  (I will post more news as they confirm the details.)

5.  Marketing and Events – Russell Lands has promoted The Ridge like no other Lake Martin development.  If you haven’t received at least 3 mailers on it, you should have your feelings hurt, because they sent them to everyone in the area that pays taxes and has a pulse.  They also have been all over the home design type magazines.  Their homes have had multiple spotlights in Southern Living Magazine, and had tons of other regional media attention and write ups.  They also have really played up the Spring and Summer Tour of Homes.  This spring they have even tied the events in with a boat show at The Ridge Marina.  I have to hand it to them, it works. In the past ten years Lake Martin has gone from a regional treasure to getting attention on a national level.  This was due in large part to Russell Lands’ tirele$$ promotions.

If you wonder how long this will last, check the map.  They are selling Phase III now, with (I guess) a couple more phases left up the sleeve for The Ridge.  Then it’s on to the next big thing.  Does anyone have a guess on where the next one will be?  Comment below!