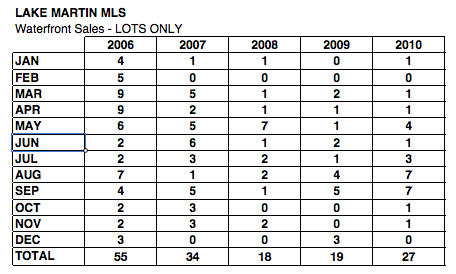 2010 proved to be a pivotal one for waterfront home sales on Lake Martin.  But what about waterfront lot sales? Would they follow the pattern set by homes? That is, would our real estate market see an increase in number of lots sold, then finally a halt to the drops in prices?

Well, first we have to see an increase in the number of waterfront lots sold on Lake Martin in a year.  Prior years have seen that number slide. So what happened in 2010?

I think that this increase signals a market shift for Lake Martin waterfront lots. Tracking the number of lots sold should tell us that changes in prices are not far behind. We have studied this theory, and now seen it in practice with waterfront homes on Lake Martin.

While waterfront home sales bounced back in 2009, it took until 2010 until prices quit falling, as we saw in this market report.

Similarly, I think that 2011 lot sales will display that same trend. I think that if – that’s if – we see continued strong lot sales, prices will stop declining in 2011. Therefore my best guess is that it will be 2012 before we have any real chance of seeing lot prices of up. Obviously, 2011 sales will dictate that.

At the end of December, 2010, the Lake Martin MLS showed that 162 waterfront lots had the status of “Active” – aka are for sale. That means that at the sales rate of 27 per year of 2010, it would take 6 years to sell all of the lots. That’s 72 months of inventory. Tons. That’s my one reservation for predicting too quick a stop of slide on prices. The “months of inventory” number needs to be drastically reduced before the market will exert any upward pressure, in my opinion.

It’s always interesting to see how the prices of lots sold on Lake Martin look.

A Word On Price Per Waterfront Foot

In my opinion, the single BIGGEST screw up that Lake Martin buyers, flippers, appraisers, real estate agents, and bankers made in the “boom times” was estimating a lot’s worth at price per waterfront foot. Maybe it didn’t hurt the average lot buyer too bad but I can think of 3 or 4 specific incidents where people bought, say, 1,000 feet of Lake Martin shoreline and applied some vague price per square foot to it, and assumed they made money when they bought it.

Many of those parcels of land are in foreclosure now, but they are in the form of failed subdivisions. This method IS WAY TOO INACCURATE to be used. To wit:

One of 2010’s most expensive lots sold was one in the Russell Lands development of Trillium. The Lake Martin MLS stated it had about 427 waterfront feet and sold at $900,000 – or about $2,100 per waterfront foot.

$300 to $2,100 – that’s a pretty wide spread. Don’t be tempted to dumb things down and use averages. Avoid that method all together and use the comparable sales method like we do for homes.

Do you own a waterfront lot on Lake Martin and are wondering how this news affects you? Or maybe you are looking for one.  We can help.  Please contact us here or at 334 221 5862.

(*)Disclaimers: All of the above info was taken from the Lake Martin Area Association of Realtors Multiple Listing Service. Accuracy is not guaranteed but deemed reliable. The above does not include sales by FSBOs or developers that sell privately and not through the MLS. But, I do think that the above represents a very large majority of all waterfront sales on Lake Martin, Alabama.