They’re On A Mission From God 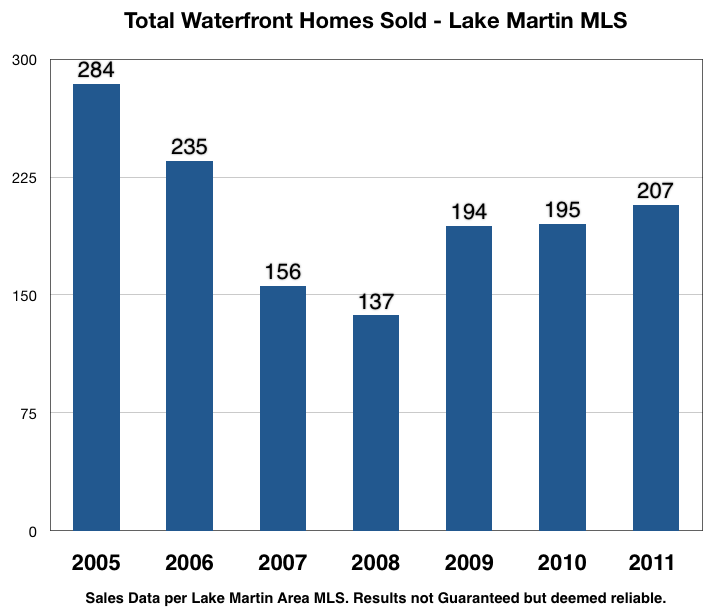 This total gives Lake Martin the highest home sales since 235 were sold in 2006.  That’s not bad once you think about it.  We posted the highest sales in five years.  The statistics I quote are taken from Lake Martin Area Association of Realtors’ MLS*, and represent all real estate agents, all brokerages, over the entire lake.

The significance of this strong year of home sales cannot be understated for Lake Martin. I have said it many times here on this blog, but it bears repeating: the Lake Martin waterfront real estate market is at least three and a half years past its bottom.  Since July of 2008, everything has been uphill with regards to numbers of homes sold.

If you would like the source data for the chart above, here below are all waterfront home, condo, and town home sales on Lake Martin, broken down by month:

Below please find a line chart showing the same data for Lake Martin homes sold, I just removed 2005 through 2007 since I was getting too many lines on my chart and it was becoming hard for me to read.  I feel that 2008 is an appropriate year with which to start this chart since it was the bottom.

I think it is also notable that 2011 is the year that the market once again broke the 200 homes sold barrier.  This is the first time we have broken 200 since 2006. Back then, Lake Martin was still firmly in the sales boom, although numbers of waterfront homes sold were dropping, prices were still rising.  We didn’t quite realize that it was turning down.  Those trying to sell their Lake Martin homes should have gotten out then if they wanted to perfectly time the market.

This year, I think that Lake Martin is in just as pivotal a year. Sales increased by about 6%, but I think that prices still have not risen at all.  I think that may change in 2012.

I only look at prices of homes sold once a year on Lake Martin. This is because we have such a small number of homes sold, relative to large metro markets. It doesn’t make sense to look at it monthly because two or three abnormal homes can skew it too much. You sometimes see a 100% increase or decrease from month to month. Too volatile. Similarly, I do not track Lake Martin home prices by calendar quarter because we are a seasonal, second home or vacation home market. Check out the monthly sales chart above and you can see that the bulk of home sales happen in warm months.

I attempt to solve our small market problem by breaking the homes sold into categories, in increments of $100,000 to start with, and then observing what percentage of the total sales that each $100k band represents.

I think the above chart shows very clearly, and confirms my gut’s suspicion, that waterfront home, town home, and condo prices did not decrease on Lake Martin in 2011. They held steady with 2010 and 2009. While some sellers may interpret this as bad news (no sales increase) I think they should count their blessings.

At least there was no dip or decrease in prices. I would be shocked if there were. After all, Lake Martin is in a rising sales environment and has been for years.

If we had seen the entire bell curve shift forward towards the blue line of 2008, we could say (in my opinion) that we have evidence of price increases. But it didn’t.

Sellers – please hear me out.  It is NOT time to raise prices like it was 2006.  I am just saying that I can see the easing of downward pressure if sales continue.