Where are Lake Martin homes listed for sale? 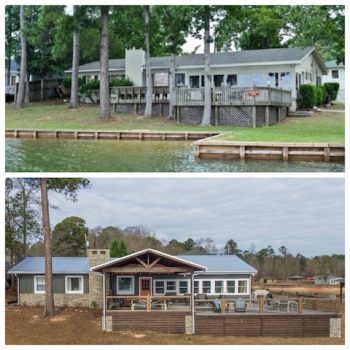 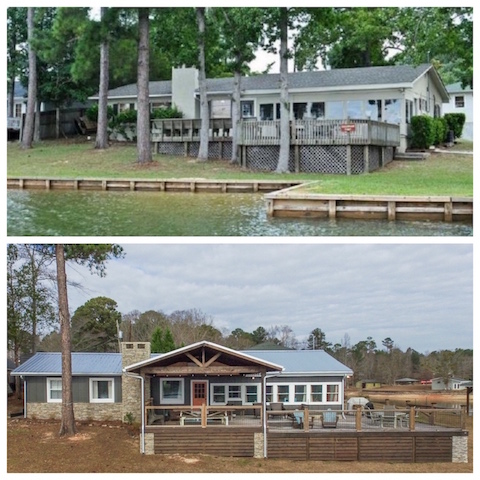 106 Windy Trail – Lake side before and after

Here is helpful information from one Lake Martin couple who purchased a fixer upper.

When I met with the homeowners back in December, I had no idea (and neither did they) that they would decide to sell their Lake home. I wanted to write an article for Lake Magazine about remodeling at the Lake and stopped by the cabin to take some “after” photos and ask a few questions.

Remodeling is popular these days. If you are unaware of this trend, just flip on the TV. Waco, Texas, has the adorable Chip and his wife Joanna. Los Angeles has Christina and whatever male she decides to include on her show.

So in going along with the trend of “old to new,” I thought I would write about lake home remodeling. When homebuyers come to Lake Martin, they often wrestle with this issue.

“Do I want to buy a brand new home? Or am I up for a remodel of an older home? How large of a remodel project would I like?” they might ask themselves.

I thought it might be helpful to talk to a couple that has actually been through the process and hear what they have to say. Granted, their experience is personal and limited to one home. But, they did put considerable thought into their remodel, and it might be entertaining and enlightening for all.

Here is their story:
Don and Kristie are from Birmingham, Alabama. They bought their home in 2011. It is located on the north side of Lake Martin and was originally built as a fish camp style home with concrete block construction. It was extremely functional but short on refinement.

The home’s original construction date was listed at 1960, but subsequent owners had made improvements along the way. While Don and Kristie loved the home as it was, they naturally sought to personalize it. Here’s a Q&A of their Lake Martin remodel story:

When you first started your home search, did you want to buy a home that was move-in ready, or were you looking for a fixer upper or a project?

Our first priority was to buy a home with great water frontage with pretty view and a level lot for kids to play. At our price range, that dictated a fixer upper.

When you bought it, did you envision fixing it up this much?

Yes, but not with any definitive timeline. It was just as we could afford with money and time. There was no rush because we did not live there full time, so it was nice to do a little and walk away for a bit. Being patient helped us to get to know the house and what we really wanted out of it. 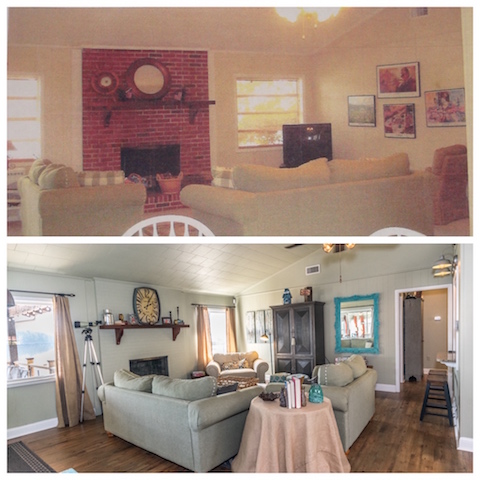 106 Windy Trail Living Room before and after

What was your first project, and was that the same project you planned when you bought?
The house was quaint and charming, but we wanted to personalize it to our tastes. We pulled out all carpet and baseboards and slowly started to replace with a floating floor and new baseboards. During that process, we took what furnishings came with the house to refurbish pieces with paint and distressing. That helped to clear some stuff and allow for flooring. It also helped us to visualize how to put each space back together from a decorating standpoint.

Which part gave you the most instant gratification?

Paint. Paint will transform a space. If the ceilings in a lake house are not that special, consider painting them the same color as walls. It really opens up a room and makes it feel larger. That is something many people will look sideways at you for suggesting until it’s actually done.

Which part was the least fun to spend money on? 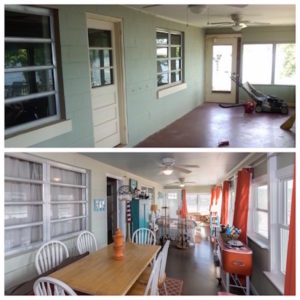 106 Windy Trail Sun Porch before and after

Did you experience “project creep,” e.g., “as long as we are fixing X we might as well fix Y?”

A tad but not tremendously. To offset the creep, we would look for ways to do things inexpensively but still with good impact, things that we might not otherwise do if it was our primary home. For example, in the kitchen, we had white Formica countertops that were fine for a lake house. But we added the pass-through and purchased a remnant of honed granite for the bar top. Instead of spending thousands on the kitchen countertop, we found Formica that was basically identical to the granite. It only cost a few hundred dollars, and it looks fine for the small space.

How did you budget for this? Did you decide on a total amount to spend and wait until you had it and then start, or did you know that you wanted to do this or that project and just did it?

The rule was, if we couldn’t pay for it out of pocket, we were not doing it. That governed our time and pace. With it being a second home, we were not so antsy to ‘get it done’ immediately.

Anything you would change?

I wish I had peeked at the ceilings in the oldest part of the house during renovation. I always wondered why the ceilings were lower in the old original camp house. Far down the road after interior was done, we were working on the sun porch that required us to reveal part of the ceiling, and it was discovered there was old tongue and groove on the ceiling. It was one of those moments of “who the heck covers this up!”

What was the hardest part of remodeling from afar?

Just having to be patient knowing we had limited time to work on it and making ourselves stop to enjoy the view every now and then.

Note: I originally published this article in my monthly column in Lake Magazine.  I am proud to write about Lake Martin Real Estate for Lake Magazine.