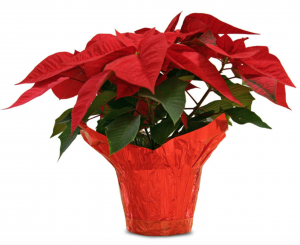 All hail the internet and the good real estate agent.

Many Advents ago when I worked in a real office with actual coworkers, one of the more thoughtful ones gave each of us a poinsettia for Christmas.  I brought mine home that evening and carelessly plopped it on the kitchen table.

My lovely bride exclaimed, “You bought me a poinsettia! How sweet!” Seizing the opportunity, I shamelessly took credit. She figured it out in a couple of days and I lost all my goodwill it had earned me.  I weakly argued that, technically, even though it was given to me, I did give it to her, so it should count.

“Re-gifts don’t count,” she said. Having lost, I grabbed my keys and headed to the mall in search of redemption.

My Christmas present to you is the gift of information.  Even though I was given this at work, please don’t say it’s a re-gift and please don’t underestimate its value.

Every year, the National Association of Realtors (NAR) surveys thousands of people who have bought and sold homes in the last twelve months. They ask them all kinds of questions from the type of financing they used to if and how they used a real estate agent.

I think that one of the key questions the survey asks is “Where did you find the home you purchased?” 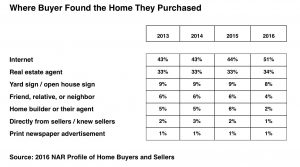 Please note, it is not asking, “What are all the different sources you used during your search?” The NAR Survey revealed that the typical home buyer uses seven or eight different sources. Among these are: online websites, real estate agents, mobile or tablet search devices, online video sites, the home builder, open houses, yard signs, etc.

No. The question the survey is asking here is, essentially, with all of the options available to buyers today, what was the one resource that, in the end, gave you the property you actually bought, as opposed to browsed around or researched.

The winner was the internet.

It should come as no shock that home buyers, just like everyone else, like the internet. I don’t pretend to be breaking any major news in that regard.

However, I do think it is worth mentioning two components of the trend. The first is the rate at which the internet value is growing, and the second is the steadiness of the real estate agent’s portion.

First, let’s take a look at the internet portion. After explosive growth in the early 2000s, it has been slowly climbing point by point since around 2011. Slowly, steadily chipping away. This slow and steady trend was busted, however, in 2016, when we witnessed a seven percent jump to 51%. That seven percent might not seem like much until we consider that it represented about a 16% increase from the previous year’s 44%.

Consider also the “also rans” in this survey. Let’s not forget them. Since “real estate agent” actually picked up a percent in 2016, that means the bottom five sources  were really the ones that gave up seven percent to the internet.

Check out the yard sign / open house sign category – there’s only an eight percent chance that will lead to a sale. Remember that this is a national survey, and that most of the buyers surveyed are buying their primary residence in a city they already inhabit. I make that point because I think at Lake Martin that number would be a lot lower. Since we are in a rural, second home market, most buyers aren’t riding around aimlessly or even commuting to work. They are on vacation, on their smart phones like everyone else, searching and then letting Siri or some other robotic voice guide them to the home.

The bad news is even worse for home builders and print advertisements. These two categories are tailing off in to nothing.  All hail the web.

What is the implication for the real estate industry at Lake Martin and abroad? Does this mean that we agents should pack away our hair dye, our balloons, and our “Agent On Duty” signs? Should we just give up and quit trying to resist being assimilated into The Borg? Should we let the web win?

I don’t think so.

Observe that the real estate agent as a source has been steady at about one third of the responders in the last several years. Sure, that number might drop in the future, but at least it’s not falling exponentially like those other resources. Why?

I think one reason is that with the proliferation of the internet comes geographic expansion of information that is available online. In other words, it is really hard these days to sift through all of the bad information to get to the good stuff. This principal is doubly true in real estate.  Despite the claims of sites like Zillow and Realtor.com, the truth is that those sites are so inaccurate that they do more harm than good. They are full of “fake news” – expired listings and property information that is flat out wrong.  Most buyers have neither the time nor the experience to sift through the chaff.  Enter the real estate agent.

Don’t get me wrong, I have no illusions about our industry. I think the internet as a resource will grow and will cause the market value of a mediocre agent to diminish. This is, in my opinion, a just trend. Nothing irks me more as an agent to see another one get paid top dollar for minimal effort. The consumer is the loser in that exchange. Conversely, I think the value of a good agent will increase in proportion to the amount of chaff in the system. People will always be willing to pay for someone that saves them time and money, and good agents do just that.