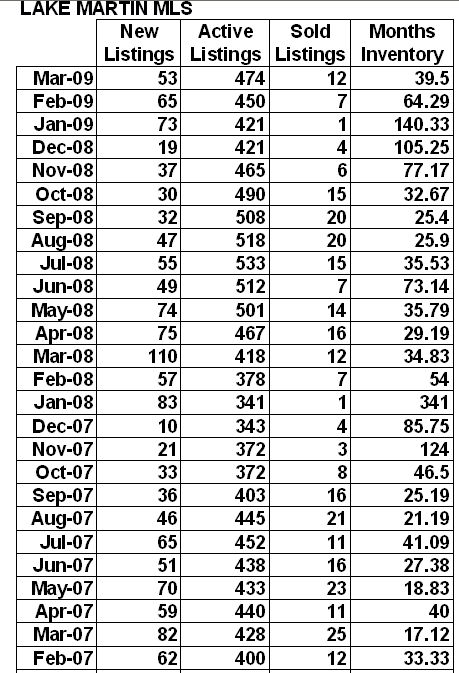 “Have Lake Martin sales picked up yet?”

I get this questions a lot.  Waterfront sales on Lake Martin are cyclical anyway, and after a tough Oct – Dec 2008 everyone is anxious to see if 2009 will be the year the market takes back off.

I guess I could make a sensational headline like: 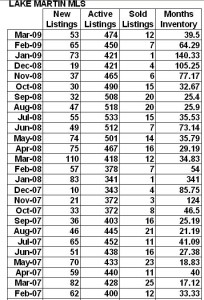 To me that is a sign of hope that sellers are pulling back a bit, and only selling when they are serious. I also think it is obvious that there is a lack of new spec homes on the market. Waterfront spec homes were still hitting the Lake Martin real estate market back in 08 because the pipeline can sometimes be about 8 months. In other words, new spec homes popping up as new listings in January 2008 were likely started around April 2007. But by April 2008, everyone had figured out that we were in an extreme buyers market, and quit starting spec homes.

What will the Lake Martin real estate market do in 2009?

No one can know for sure at this point, of course, but here are a couple of indicators that I watch:

1.)     2009 monthly sales beating 2008 – by this I mean in number of homes sold.  We have already seen in 2008 that average prices fell.  So according to what we know about real estate cycles then we should expect to see individual months in 2009 beating their 2008 counterpart BEFORE we see prices rebound. But, current year MUST start beating prior years.  It happened in the last part of 2008, and 1Q09 beat 2008 timidly, which is why the smart money eyes will be on the crucial period of 2Q09 (April – June 2009).

2.) Cities / States that were Bubble Sources – I am not a real big believer in strong trickle down connections between markets, at least in a 1 to 1 relationship.  But it is interesting to watch with the economy as a whole.  I watch Florida, California, and Atlanta.

(*)Disclaimers: All of the above info was taken from the Lake Martin Area Association of Realtors Multiple Listing Service. Accuracy is not guaranteed but deemed reliable. The above does not include sales by FSBOs or developers that sell privately and not through the MLS. But, I do think that the above represents a very large majority of all sales on Lake Martin.