Yes, It Is Raining Here 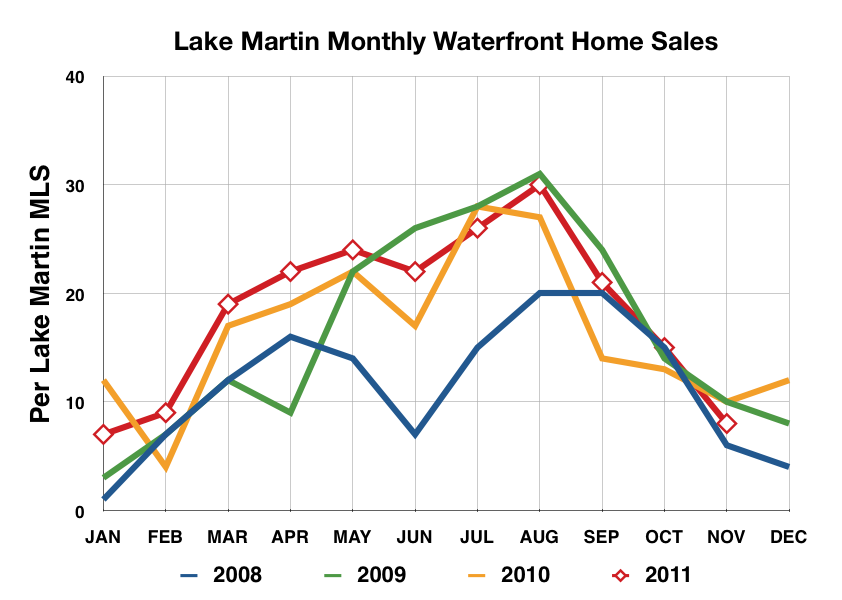 The Lake Martin MLS* reports that 8 waterfront homes, condos, and town homes were sold in November.  This includes all real estate agents, all brokerages, on the entire lake, that are members of the Lake Martin Area Association of Realtors.

This year’s number of waterfront homes sold so far on Lake Martin has surprised me. After a strong summer and fall, I thought that we would end the year with 205 or so total. Hitting 203 with one more month to go is very encouraging.  My revised estimate for the entire year is 210 or so homes sold, which, as mentioned, will be the best since 2006.

Will December 2011 beat December 2010?  I doubt it.  Last year there were 12 waterfront homes sold through the MLS.  That’s strong – the best December since I have been tracking the numbers in 2005.  The average amount of Lake Martin homes sold in December has been about 6 if you look at 2005 – 2011.

If that holds true, Lake Martin will be on a two month losing streak to the prior year. Does this bode ill? Not necessarily, in my opinion.  Firstly, it’s hard to be anything but happy with the best year’s sales since 2006.  Secondly, we have learned that the winter months can be unreliable predictors.  To wit, 2007 had an awesome first quarter before totally tanking.

I won’t slice the numbers too much this month; I need to save my strength for my year end review later this month.  But in case you are interested, there was another waterfront lot sale on Lake Martin in November:

Also the sales versus the prior month chart is as expected, November posted a loss versus 2010 but overall the year was great:

Waterfront lot sales for Lake Martin property sold through the MLS were also strong in November.

Strong lot sales on Lake Martin this year could mean a good year for the construction industry. Granted, total waterfront lot sales are only about 60% of their peak in 2006, but hey, over 30 is a good year.

As I mentioned above, I will put a greater amount of emphasis on the year end numbers. I will wait a week or so more to make sure that all realtors and brokerages on Lake Martin have finalized their reporting to the MLS, so please stay tuned!