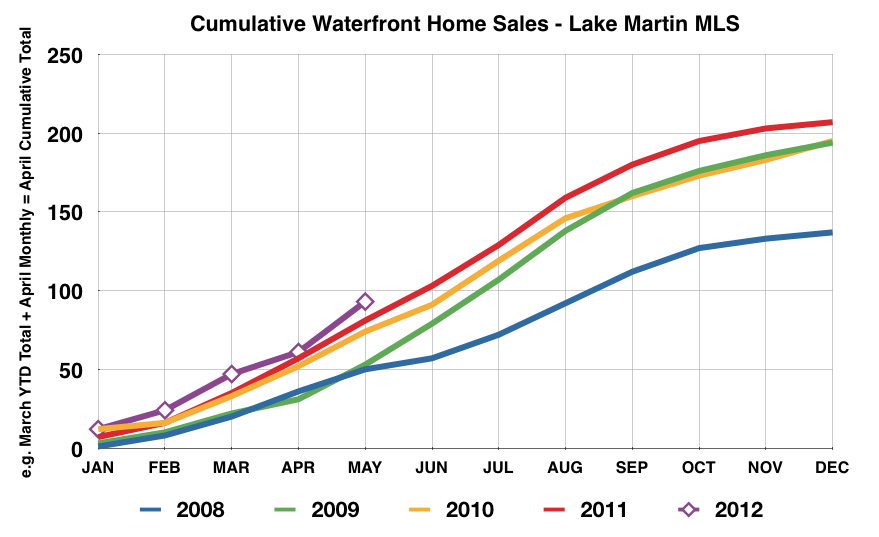 The Lake Martin real estate market had a smashing May, tallying 32 waterfront homes sold! This is the highest number of homes sold in six years, since May of 2006.

In this real estate market report I wrote for Lake Magazine, I noted that according to the Lake Martin MLS*, April 2012 had a relatively weak number of waterfront homes sold. I wondered if this was a signal that the Lake martin market was slowing down, or if this is a mere timing thing, setting the table for an explosive May.

It seems the latter was correct. 32 waterfront homes sold in one month is a lot for a little market like Lake Martin. Please note these numbers encompass all brokerages, all agents, in the Lake Martin MLS.

To help put it into perspective, I looked at each month’s sales history since January, 2005. I found that May 2012 was the best home sales month on Lake Martin since 33 was sold in May of 2006. Think of that – the last time we have seen sales like this was in a confirmed seller’s market of 2006.

Also, another way to view this month is to ask this question:

Q: Since January of 2005, how many times has the Lake Martin real estate market exceeded 30 waterfront home sales per month?

I think this proves that April 2012’s weak showing of 14 Lake Martin waterfront homes sold was an aberration, a timing issue. Of course, the same could be said about May, but I doubt that is really the case. As I write this, there are 23 home sales pending in the Lake Martin MLS and 17 recorded as sold since June 1. In other words, June is setting up to be a good sales month as well, very likely to beat the prior year’s June total of 22 homes sold.

If we step back and look the cumulative total number of waterfront homes sold on Lake Martin so far this year, we see that 93 homes have sold. Once again, this is the best five month start since 2006.

Lake Martin waterfront lots are also selling well so far in 2012. In May, 10 lots were sold, which was the best since 10 sold in April 2011. Other than last year, we have not seen that many lots sold since 2005.

When I first started blogging about Lake Martin real estate way back in 2007, I always included the numbers of waterfront homes for sale on Lake Martin. Every month I trotted out the supply. But, it got rather tedious so I stopped doing it every month, only mentioning it once per quarter or so. I don’t really know why. Maybe it was because it frustrated me to see the number of homes for sale keep rising when the Lake Martin market was in an obvious shift to the buyer’s side of the equation. I don’t know.

I do think it bears a look now, in light of the sustained sales.  I took a look at the number of waterfront homes for sale on Lake Martin in the last few years. It has been dropping quite a bit. If we use the month of May as an example, we see that in May of 2009 there were 589 homes for sale on the MLS. May of 2010 saw it drop to 492, then drop to 476 in 2011. In May of 2012 it was only 411. That is a 30% decrease in supply in three years. True, that percentage fluctuates based on which month you consider. It also is true that many more condos were for sale back then, but I looked at the condo effect in this post and it wasn’t all that big an influence in sales.

If supply stays low and sales continue on this trend, could 2012 be a year of actual price increases?  I’m not willing to go out on that limb.  Yet.